A Butcher Knife for Sausage Making?

Good Choice...But others may be better

If you're going to make sausage, it goes without saying... you're going need a butcher knife (or something similar) to cut up meat.

It's much more economical to buy large cuts of meat than it is to rely on the shrink wrapped packages in the meat counter and...

...If you are ever going to be making sausage from game, you might be dealing with a whole animal carcass someday.

A butcher knife like the one shown here will certainly do the sausage making job. Its very name tells you what it was designed to do. But...

...I find butcher knives to be a bit large and hard to control for most of the meat cutting I do though and much prefer a... 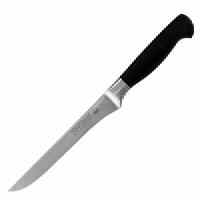 The slim blade of a boning knife makes slicing through meat easier because the sides of the blade don't drag and stick as much as those of a wider knife do.

The narrower blade also makes a boning knife more flexible than most other butchering and cooking knives.

That can be important when you are cutting meat from around bones (hence the name "boning knife") and trimming excess fat. A boning knife is also an excellent all-around knife for the kitchen. Multi-tasking is always good.

My favorite boning knife is made of carbon steel and has a blade that is 6 inches long. I prefer carbon steel to stainless because I find it easier to sharpen. Just remember that carbon steel will stain and possibly rust if you don't care for it properly. Never put your knife away wet, and you should have no problems.

By all means though, if you prefer the easy care of stainless steel

Make sure you get a boning knife that you like the feel of in your hand. You'll be using it a lot, and you want it to be comfortable. Also, don't get a blade much shorter than 5 inches or longer than 7 inches...too long is clumsy and too short won't let you cut through thick portions of meat in one smooth stroke.

I could easily get by in all my sausage making with nothing more than a couple of good boning knives like the one above (it's nice to have more than one).

A chef knife does a great job of chopping all your herbs and spices, and it will work as well as (or better than) a butcher knife for cutting really large joints of meat. A large chef knife will also make a reasonable substitute for a cleaver. It's another great general purpose knife to have in the kitchen.

...Good knives will last at least your lifetime if you take care of them. Buy the best you can afford, but you don't have to break the bank.

...Get a good knife sharpener and learn to use it. A dull knife is a useless tool...and dangerous to boot.

...Always store you knives in a knife block, never in a drawer. One of the fastest ways to damage a knife's blade is to have it rattling around with other utensils.

...Hand wash and dry your knives. Never put them in the dishwasher. Dishwashers kill good knives.

There you have it. Yes, there are better choices for the sausage maker than the traditional butcher knife. My advice is to get a boning knife as your first purchase, then consider adding a chef's knife. If you like the feel and the utility of good knives (like I do), you'll probably end up adding a few more to your collection over time.